96-year-old Pushpa Sharma is the new talk of the town in Delhi's Shahdara area where her neighbours are amazed by the grit of the woman, who has recovered from COVID-19.

Her family members, who too were down with the deadly virus, credit her "willpower" and the "positive atmosphere" at their home for her recovery at a time when the second wave of the COVID-19 pandemic has hit the country hard.

Sharma, who lives with her son Arun Kumar (67) and daughter-in-law Meena (64) in Naveen Shahdara, tested positive for the infection on April 18, but was under treatment at home, and doctors confirmed her recovery on May 9 following tests, her grandson Kunal (35) said.

He said it was almost a fortnight of challenging times for the whole family but 'Chaai ji' — as Sharma is fondly addressed by everyone in the family and neighbourhood — has finally recovered from the severe infection and looks good.

"The second wave was already there and the condition in Delhi hospitals did not look good either. The scarcity of resources was known to everyone. So, we decided to keep her at home only and consulted doctors," Kunal told PTI.

However, the family's challenges were amplified as Sharma's son, a businessman, and her daughter-in-law, a retired government official, were also down with the infection.

The wheelchair-bound nonagenarian's grandson Kunal, a pilot with a commercial airline, and his wife were also indisposed because of the coronavirus.

"She (Sharma) was not much aware of the severity of her condition but would moan because of pain, fever and weakness. But my father made sure that we had a positive ambiance at home along with medicines. He did this notwithstanding the fact that he and my mother, too were down with the infection," he added.

Her CRP (C-reactive protein) test report showed the level of infection at a high of 82 on April 27 and a normal of four on May 9 after which she was declared COVID-free by doctors, who also reviewed her other reports pertaining to treatment of the infection, Kunal said.

CRP is a type of protein produced by the liver that serves as an early marker of infection and inflammation. In blood, the normal concentration of CRP is less than 10 mg/L but it rises rapidly with the onset of the infection and its severity.

The recovery of Sharma, who had moved to Delhi from Gujranwala town in pre-Partition Punjab in the 1930s, has not only brought her family relief but also hope and motivation to locals.

Shahdara resident Nandini, who works in a multinational corporation, said Sharma is a grandmother to her, like many others in the neighbourhood.

"We were shocked and had almost lost hope as other family members were also COVID positive and quite low. But Chaai ji has fought the virus wonderfully well and hats off to her, to her willpower and spirit of not giving up. Her willingness to live has inspired many to not panic and keep the fight up against the coronavirus," Nandini said.

Another Shahdara resident Gaurav Mahesh Gupta said 96-year-old Sharma's recovery is a blessing of God and motivated many in the neighbourhood who are struggling with the pandemic.

The Sharma family, meanwhile, said congratulatory messages to them on WhatsApp have not stopped since the word went out that 'Chaai ji' has recovered.

People in Shahdara area of Delhi, like the rest of the national capital, have been hit hard by the second wave of the coronavirus.

According to a Delhi government list on Thursday, Shahdara has 350 active containment zones because of COVID cases. 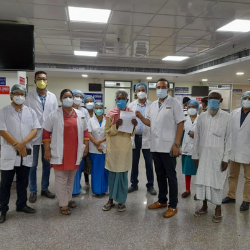 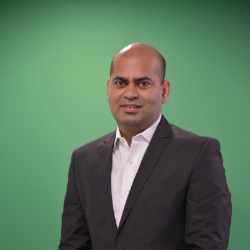 A battle with Covid-19, unassailable personal loss and a second chance at life 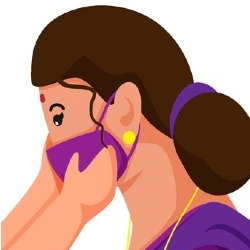